Past Meetings and Events

Theodore Roosevelt: his life and his home Sagamore Hill
Commemorating T.R. during the Centennial of his passing

Sagamore Hill National Historic Site was Theodore’s only home and served as the nation’s first Summer White House. Theodore raised his six children in Oyster Bay alongside his wife, Edith Kermit Roosevelt. Join us as we delve into the home that we treasure. A park guide from Sagamore Hill presented a talk that featured Theodore Roosevelt’s life as well as his beloved Sagamore Hill.

Hicksville: Then, Now, and in the Future

Hicksville historian James Janis presented his program “Hicksville: Then, Now, and in the Future.”

Peter G. White gave us a review on his work, Kay’s Triumph: A Woman’s Journey Hall of Famer.
It is a biographical account of a local single mother of four who rose from poverty to become a grammar school teacher only to be tragically killed in an automobile accident. Our heroine raised her family in Hicksville and Levittown and became a first grade teacher at Holy Family School in Hicksville. It is a heartwarming and encouraging story of one who lived among us. 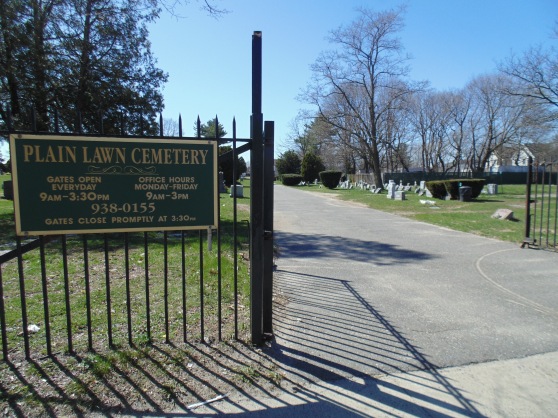 On Old Country Road between Wantagh Parkway and Newbridge Road is an oft glimpsed but unrealized and neglected historical treasure. An open air museum and a permanent record written in stone of Hicksville history….her residents, her stories, her triumphs, her tragedies, her mysteries……..her soul…..the Plain Lawn Cemetery is the town’s oldest continuous business dating back to before the Civil War. Historian James Janis provided a journey along the paths of the past and present at this remarkable local research resource. 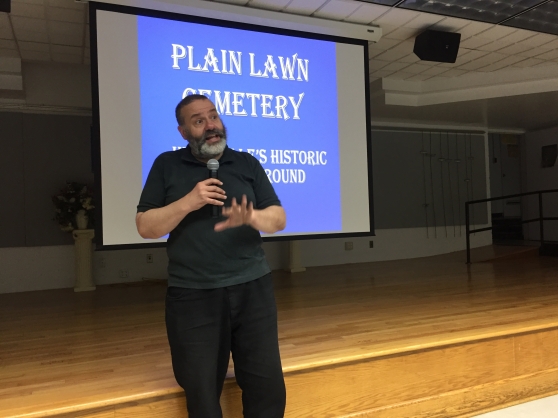 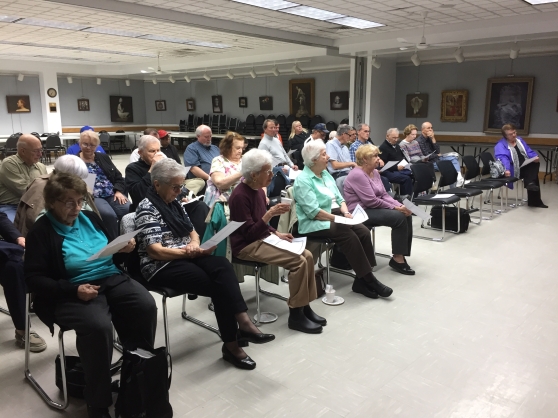 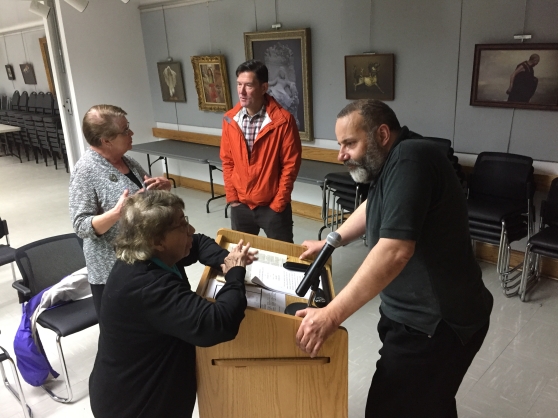 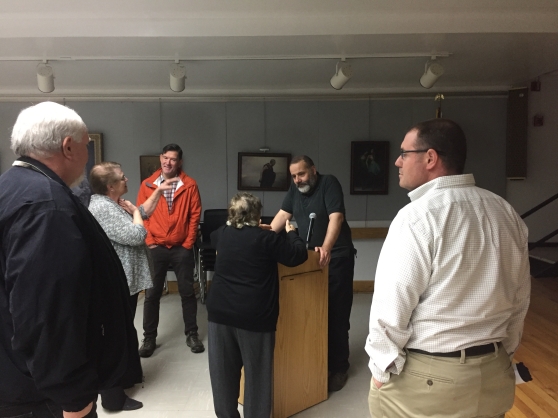 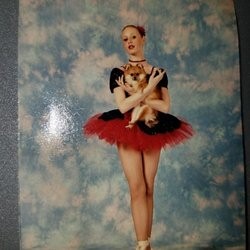 Many of us know it as an English Tudor-style storefront along Woodbury Road. Ms. Joanne of the Woodbury Studio of Dance Arts provided us with a history of the business and the studio which once served as a guitar museum.

On January 21, BARBARA LOMNICKI PERINO led a discussion of Hicksville memories with over thirty people in attendance. 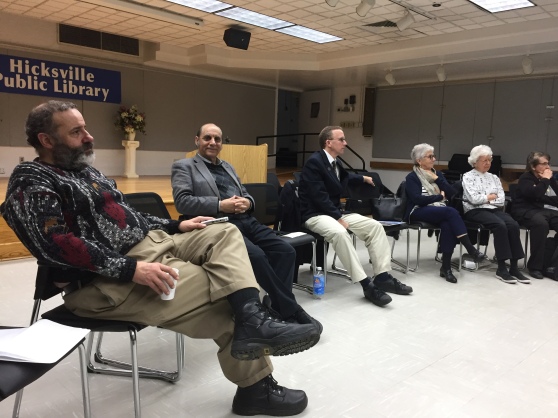 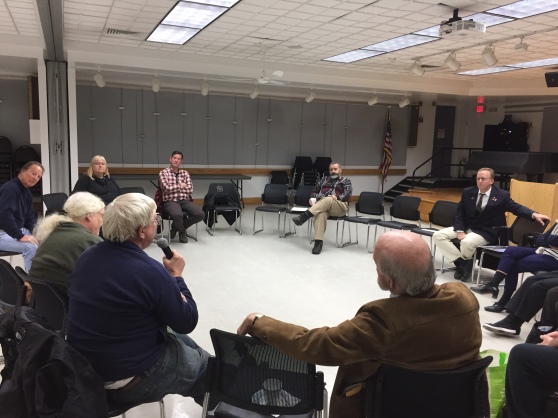 In an attempt to hear your stories, the evening featured a roundtable discussion about Hicksville experiences.

State of the Town of Oyster Bay 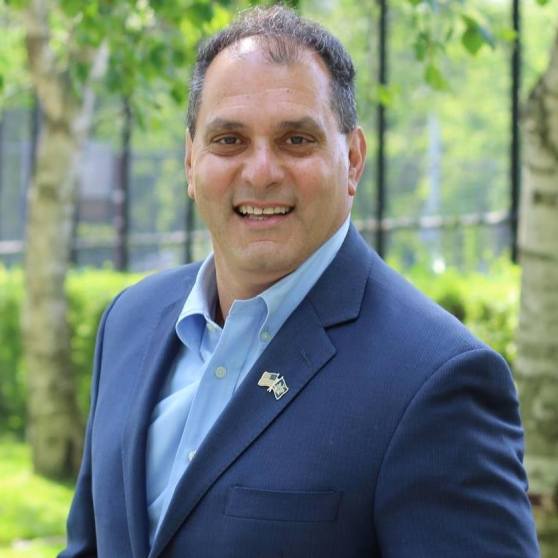 The Town Supervisor discussed the actions taken by his administration to reduce costs for taxpayers, institute ethics reforms to protect resident’s wallets and review the challenges the town faces in the years ahead.

Starting in 1942, Grumman aircraft published a company newspaper with the clever title of Plane News. Intended to both inform and inspire the morale of the employees, it….many decades later…an incredibly valuable primary source for not only the company but the employees, American culture, Long Island and Hicksville during the Second World War.
Hicksville Historian James Janis shared the fruits of his research on this subject revealing much heretofore unknown knowledge about Hicksville and its residents from 1942-1945. He also shared the secrets of historical research which is not magic but just common sense and diligence. 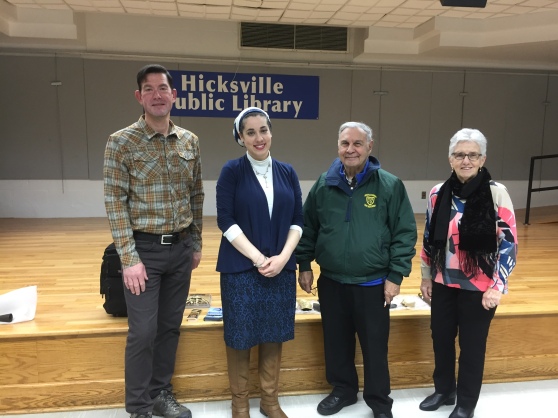 The story of whales, and the whalers who followed them, is tied with Long Island’s rich maritime history. Before the Long Island Expressway, strip malls and suburban sprawl, calls of “Thar She Blows!” rang out from Long Island harbors and ships. Nomi Dayan, the Executive Director of The Whaling Museum (second from left), Education Center of Cold Spring Harbor, and author of the 2016 book Whaling on Long Island, gave a pictorial presentation exploring the rise and fall of whaling on the Island.

The Story of Hicksville Community Council
and Boys & Girls Club 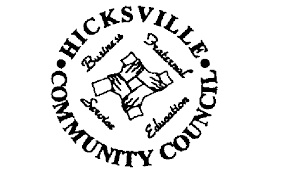 The Incredible Vanderbilt Cup Races on Long Island: The Role of Hicksville 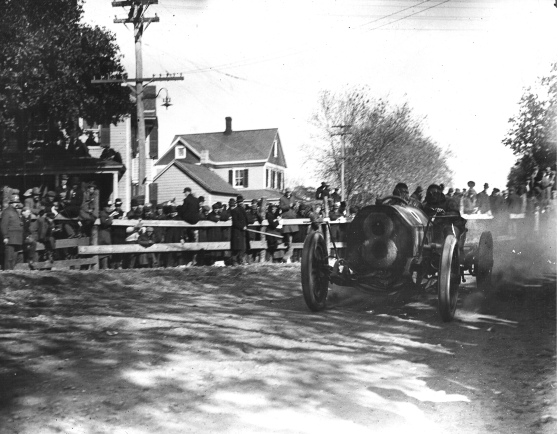 The American Revolution on Long Island 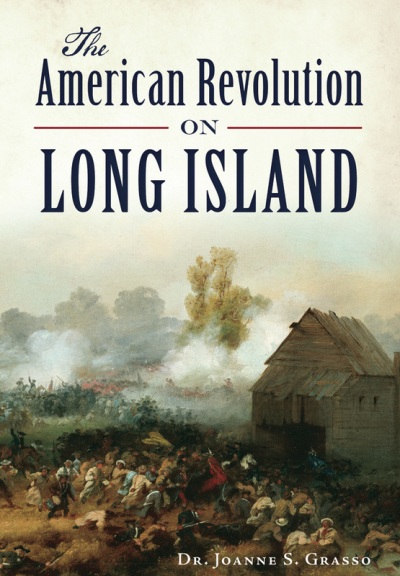 The History of the
William M. Gouse VFW Hall 3211 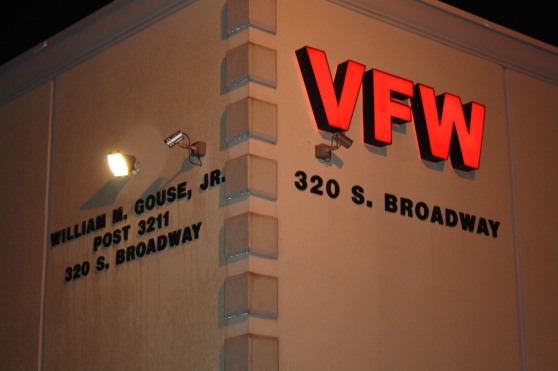 Commander Bill Walden gave a presentation of the history of the William M. Gouse VFW Hall 3211 in Hicksville.

The History of St. Ignatius-Loyola Church

Father James T. Stachacz and parishioner Mary Ann Lang gave a presentation on the history of Hicksville’s St. Ignatius-Loyola Church.  This year the church building is celebrating its 125th anniversary.

Paul Hunchak of Old Westbury Gardens gave a presentation on the personal lives of John S. and Margarita Grace Phipps and how they reared a family in the Old Westbury House during the Gilded Age.

Forgotten: Hicksville in the Pacific

The presentation given by Hicksville Historian James Janis was the story of Hicksville during the Pacific theater of the Second World War and the men and women who contributed both at the front and at home.